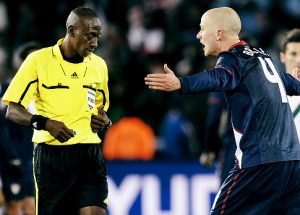 For all you futbol fans, or perhaps those that love the USA, let’s talk about composure. I’m talking about the kind of composure that players keep when faced with adversity. Athletes that lose their pantalones when the calls don’t go their way, and the ones who don’t waiver at all. When team USA found themselves in a lose and leave situation after the wrong call heard round the world, they had two paths to take – get angry or get focused. Kudos Coach Bob Bradley for keeping a cool head and telling the players to move on. Ultimately, the team’s determinations to play harder resulted in a W and advancement to the next round. Whereas, team France, ah sac le bleu. They lost their berets after their coach tossed a player from the tournament. Staging a walk-off during a scheduled team practice in protest. The result, France lost. They’ve always been good at resisting.

Most athletes will say that frustration can lead to mental anguish during a competition. It’s how strong someone is at times in the mind that matters more. When you have a raging attitude as a teen, you’re a “hot shot.” Later in life they’ll call you an “asshole.”

In life there are the Johnny Macs, notorious at shouting, and the Galarragas – the Detroit pitcher showed not one sign of anger after losing his perfect game in the 9th with two outs to a call where even the Ump admitted fault.

It’s in these tests of character when one has to reach inside for something more than physical strength, that true champions triumph.

When calls aren’t going your way or when your workout or training goes kaput, breathe. Proper athletes are going to go through more than time trials. Learn to control your emotion and harness your vulnerability. If you have a bad day on the bike, instead of hurling that light hunk of junk, walk it off and get back on the saddle.

This coming from a person that loses their crap sometimes for no good reason. Traffic and a copier paper jam can turn me into the Hulk. Typically in sports I can put mind over matter. Maybe I need some composure in my day to day, ha.

Are you the calm and collected type or do you dwell on bad juju? And be honest, I promise I don’t judge!

67 responses to “Try a Few Reps of Composure”

Hi y’all! I’m Nichole and I cover all aspects of running, health and fitness, including training, gear, nutrition and other fun topics to keep you motivated and moving. I believe working out and staying fit should be a lifestyle and not “work.” I’ll try my best to bring out the fitness guru in all of us!

Sites To Keep You In Check

Live For The Run